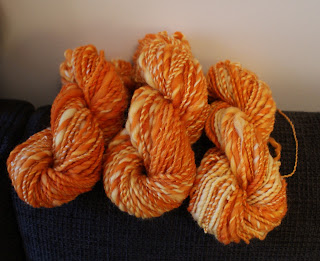 My dream came true and I finally learned how to spin on a spinning wheel. It´s not like I haven´t spun before, I used to spin on the drop spindle (since spring 2009 when I learned how to) and have not been able to make yarn on the spinning wheel even if I tried it out many times. Why? I honestly don´t know. Maybe it was the fact that when spinning on the wheel you have to coordinate both feet and hands (and brains!) and that was too much...
Anyhow, My first made yarn in the picture above consists of BFL and Polwarth. Both fibers purchased from KnitLob´s Lair. It´s uneven and it has too much twist in it. But...I LOVE IT! It´s sooo pretty! And soft! I have no clue whatsoever how many meters I have of it. I haven´t measured it. I weighed it though: 130g.
It is a 2-ply and plied clock wise because I spun it counter clock wise. 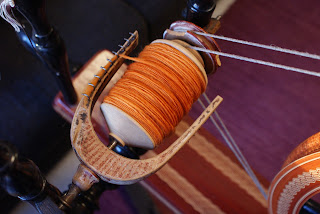 The next yarn coming up is spun clock wise and now I´m really trying to make it even. Counting as I spin makes it easier to draft and the fibers are spun together nicely. The spinning wheel is a Kiikka spinning wheel. It´s made in Finland and the maker is Wilho Ulvén. So I named it Wilho. It works really well for beeing an old gentleman. We believe it to have been made in 1930-1940.
Kiikka is a municipality north from Helsinki. In the early 1900´ the area was famous for their spinning wheels and if you wanted quality, you bought a Kiikka! The municipality still has a spinning wheel in their coat of arms.

I promised to tell a little about my years after school. I graduated in 2011 and got a fantastic summer vacancy for three weeks as an Advisor, teaching children how to weave on the loom. After that I got the offer to stay during the whole summer through out the holidays. In the autumn the offer was to counsel young adults teaching them basic skills in knitting, crochet and weaving. In 2013 I´m still working there. My employer is The Finnish Arts and Crafts Association in Oulu and boy have I learned much! Right now I´m in the middle of planning the schedule for the next group of young adults. I´m really thankful for getting to do what I love most: making things, teaching how-to and inventing new handicrafts. Come visit us. Our shop is open Mo-Fri 10-18 and Sat 10-16.
See ya´.
<3 ♥ Hannah

The postings on your site are always excellent. Thanks for the great share and keep up this great work!

Thank you for sharing, please visit
Visit Us

50 something artisan in textiles living in northern Finland. coaching a 50 something DH. mother of two beautiful grown-up daughters with two gorgeous sons-in-law.

Please, don´t use my photos without permission, Thank You!